The end of year show for our second Year Photography class opens on Wednesday. The official drinks and nibbles is on next Friday Nov 5th between 6 and 8pm.
We have been busy printing and framing our work in preparation.

A good thing about being back is the opportunity to catch up with some more contemporary art.
This weekend I saw 2 exhibitions that were closing this weekend.
The first at New North gallery
http://www.newnorth.com.au/index.php?page=group-m
the work of Group M members: Albert Brown, George Bell, Roy McDonald, Harry Youlden and Richard Woldendorp who were active in Melbourne in the 1960s 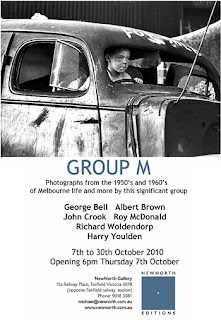 The second gallery was Heide where the confronting photographs of Carol Jerrums, William Yang, Nan Goldin and Larry Clark were in an exhibition called Behind the Lense: Up Close on Film.
They were documenting their lives, and recording images of their friends - none of them what you would call conventional. All of the photographers who were represented were engaged in portraiture, but in the 1960s and 70s they were a generation apart from the Group M  folk. The latter were still using formal and 'polite' approaches - in the tradition of Cartier Brersson. While Jerrums cited Cartier Bresson as a major influence, her work and the work of  the others in the show would have been more at home on the pages of Rolling Stone than Paris Match. 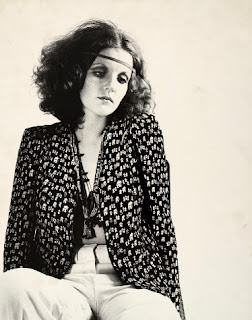 This is the image used to promote the show - Carol Jerrums.
Posted by fairmuse at 10:11 PM No comments:

How wonderful to be home and to see the garden looking wonderful.
Posted by fairmuse at 9:48 PM No comments:

In Italy and Malta

Currently I am in Italy (via Malta)
the blog I will be updating is http://sueberntravelog.blogspot.com
Posted by fairmuse at 6:39 PM No comments: